The Hard-Reset Of Our Social Lives, Post-COVID

So there are some things that have been a bit…glitchy. We’ve googled our rabbit-holes and ‘troubleshooted’ to the best of our respective abilities.  The latter, for most people, consisting primarily of terrifying our cats by setting the computer mouse down too hard while exhaling just slightly more forcefully than usual.  Others amongst us leverage the classic time-renowned strategy of vocalizing some combination of the words: ‘go,’ ‘fuck,’ and ‘yourself’ over and over interrupted only by the occasional ‘Siri.’

But even if you happen to be one of those saint-like souls that have diligently filed IT tickets and patiently await a response, you’ve still failed to see anything resolved. And so there is only one thing left to do: the hard reset.

And in case you’re only 91% sure what that is, I’ll clear it up for you: it means turning it off, then turning it back on again.  Or sometimes adding (just for good measure) unplugging it, and then plugging it back in again. Usually, miraculously, it works!

Except I’m not talking about our computers or phones (or tablets or watches or iBrains or whatever), but rather our social lives. And for those of you like myself with short memories, here’s a refresher of what that term actually means (courtesy of Merriam & Webster: world’s hottest lit-couple):

// She does not have a busy/hectic social life, because she spends all of her time trying to make this picture not  blurry.

Basically what I’m meandering at is this: as a growing number of us become vaccinated, things are changing (again). We’re starting to actually be able to go out and…socialize. Like…for fun? In public! And while that might be exciting (and also terrifying) to even the most introverted amongst us, it also presents us with an opportunity to reflect.

On what we hated about it before. So we can (attempt to) change it this time.

Put another way: as we begin to dip our toes back into the waters of the social world (waters like bars, restaurants, parties…or for Merriam & Webster “the club”), we’re going to have to remember how to swim.  Because the last time we did at least feels like a long time ago.  Almost as if the slate has been wiped clean of  social rules, leaving them to be rewritten again.  Almost as if quarantine was a palate cleanse after our pre-covid ‘first course’ social lives, and before our post-covid ‘second course.’ A palate cleanse consisting of rice, ramen, and tears.

Or almost as if (circling awkwardly back to my original metaphor), we’ve just conducted  a ‘hard-reset’ of our glitchy grasp on social technicalities and now we’re powering up…and crossing our fingers it works.

But before these social rules get written (again) by a thoughtless mishmash of ideas seemingly generated by Windows 8, I’d like to propose the following:

Submitted for the approval of The Midnight Society, may I present to you the…

1. No more eye rolling at someone in public. It’s just mean.

Yes, you can continue to roll your eyes at them in private. We’re only human.

2. No more pretending not to have seen that post/update/picture on social media and acting surprised when you hear about it in real life.

3. No more refusing to even chuckle at someone’s genuine attempt at humor to lighten the mood…

…unless of course it’s genuinely offensive, in which case please proceed with scoffing.

And unless of course you’re participating in a who-can-laugh-last style staring contest. In which case, please proceed and also:  I challenge YOU!  To A DUEL!!!!!!!

(FYI you will definitely win this game. Every time.)

4. But also no more pretending that a not-funny joke is the most hilarious, outrageous, fucking best joke you’ve ever heard.

5. When someone makes a joke or reference and you have no clue what it’s about, you don’t have to pretend like you do.

It’s ok to say you don’t know something. Probably, it will lead to an even better conversation. You won’t look stupid. Promise.

6. (Which reminds me) Don’t make someone feel stupid for not knowing something.

Be excited to tell them about it! Don’t be excited that you know more than them. Guess what that makes you? A know-it-all. And nobody likes a know-it-all. Stupid!

7. When you’re in a three person cluster, and you’re the person talking, don’t just talk to one of the people in the cluster and leave the third person feeling invisible even though they keep making eye contact with you, nodding, and attempting to participate in the conversation.

This isn’t cool even if you’re pretty sure you’ve never met the third person.  But it’s especially not cool when you have met them, four–no five–other times and this hypothetical third person even remembers that your name is Travis but you can’t even remember that they exist in reality. Hypothetically.

8. No more gossiping about someone if they’re in the building.

It’s super stressful for everyone involved. Also, you think they can’t tell, but they can tell. And no more spreading rumors, either (unless they’re kind ones).

9. Actually, can we just agree to not be mean in real life, in general?

Because that’s what Twitter’s for.

10. Wash your hands after you use the bathroom.

We mean it this time.

11. You are officially no longer obligated to feel like you have to fill awkward silence with any of the following:

I know, but the silence is terrifying.  It’s ok if you do it. Just don’t feel obligated.

12. And let’s try not be on our phones in the middle of conversations with people.

Whatever it is, it can most likely wait.  But in case you need some help: 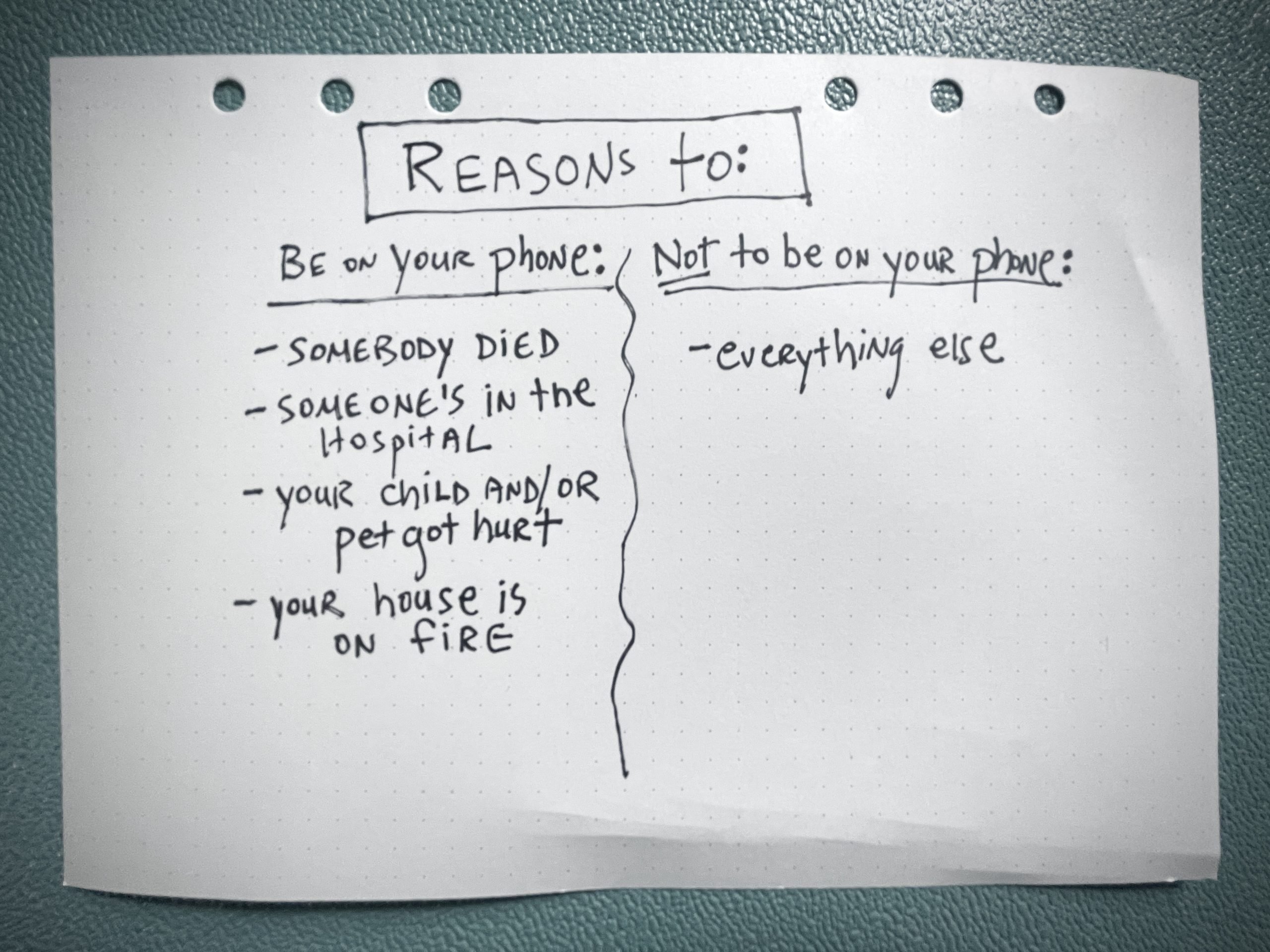 …but also, let’s not judge people for being on their phones during conversations. It could be for a valid reason, after all. Or even if not, this shit is hard.

Lastly, and perhaps most importantly:

13. Nobody has to make up excuses to miss social events anymore!

Which means no more attending obligatory social events EVER. Again.

From here on out, by the power vested in me, you can just be honest and say it when you feel like staying in.  And no of course no one will be offended!  Especially because I heard Sheila say that Lori heard that Travis doesn’t even know you exist.

* DISCLAIMER: This ‘article’ is entirely written in jest.  I hate it when articles on The Internet™ tell people what they should or shouldn’t do (also I may or may not be talking to myself in at least some if not a majority of these ‘rules’) and in no way am I attempting to actually tell you how to live your life. Unless you want me to. In which case please subscribe to my YouTube channel and blahg. Good day.